Named for Ohio State’s first president and geologist, Edward Orton Sr., Orton Hall is the only building in the world that was intentionally designed to reflect geologic time. The intricate stone carvings inside and outside are not only breathtaking but are also geologic in nature. The chimes in the bell tower are a reminder that the building is all about time.

Dedicated and opened in August of 1893 on the historic Oval, Orton Hall is the second oldest building on the Ohio State campus. The building was designed by the architectural firm of Yost & Packard. Joseph Yost and Frank Packard designed many iconic buildings around central Ohio, and are among America’s most renowned architects. Orton Hall was originally built to house the Orton Geological Museum, the University Library, classrooms, and office space. The University Library was moved from Orton Hall in 1899 and replaced by the Orton Memorial Library of Geology after Edward Orton Jr. generously donated his father's private library in 1904.

Orton Hall is recognized on the National Historical Register of Historical Buildings. It is a magnificent example of Richardsonian Romanesque architecture. Originally, the building was exclusively constructed using Ohio building stone, arranged in correct stratigraphic order, from Silurian at the base to Carboniferous near the top of the bell tower. The main structure of the building, therefore, represents the Paleozoic Era. The grotesques in the upper reaches of the bell tower depict Mesozoic Era and Cenozoic Era animals, so in total, the building depicts Paleozoic, Mesozoic, and Cenozoic stratigraphy and life forms. The top of the bell tower is decorated with sculptures depicting extinct creatures, including dinosaurs, ichthyosaurs, pterosaurs, and a saber-tooth cat. The iconic bell tower houses 25,000 pounds of bells, added in 1915, that chime every 15 minutes.

The columns in the Orton Hall foyer recognize the 24 principal 19th century building stones of Ohio. Architectural details also include a splendid example of “Scala Naturae” (the great chain of being) with progressively younger fossils depicted on the column capitals the farther into the foyer they are placed.

A 24-foot dinosaur skeleton, molded from a fossil discovered by Ohio State professor David Elliot, now stands guard in Orton Hall's lobby. The Cryolophosaurus was brought to campus through a crowdfunding campaign that drew donors from all over the world. 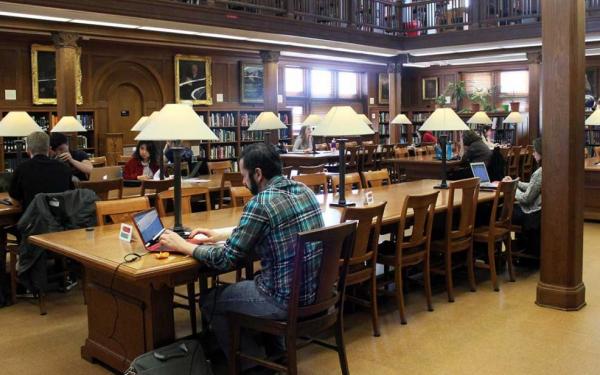 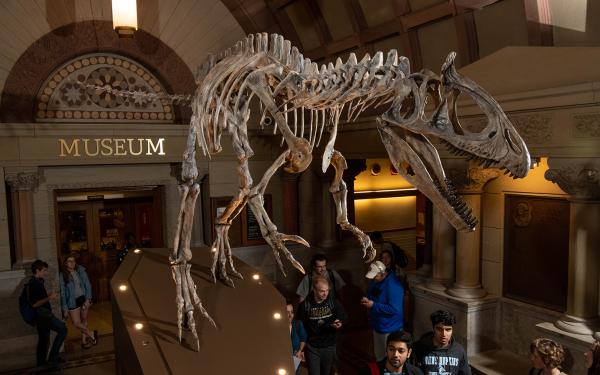 Orton Geological Museum has played a vital role in Ohio State’s teaching, outreach, and research for more than 120 years, hosting 13,000 + visitors annually, from near and far. Some are faculty or student researchers interested in very specific areas. Others are Ohio State students from diverse disciplines, including English majors, who have been known to come, soak up the atmosphere and write poems. Many are members of various clubs or the general public from all across Ohio. All have the opportunity to view the extraordinary geological history displayed in carefully arranged exhibits selected from a treasure-trove of 500,000 + rocks, minerals, and fossils from around the world.