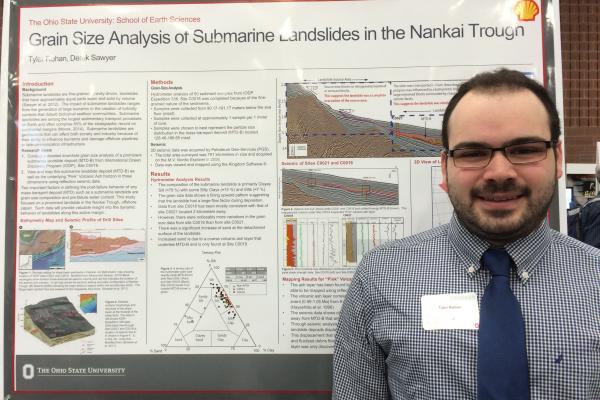 Congratulations to Tyler Rohan, BS with research distinction, May 2016 (expected) for winning first place in the Mathematical and Physical Sciences Division. Tyler, advised by Assistant Professor Derek Sawyer, presented his thesis research on “Particle size analysis of submarine landslide sediments in Nankai Trough, IODP expedition 333 site C0018.” Tyler began his studies of marine landslides in Summer 2015 as one of the Shell Undergraduate Research Experience interns. Tyler is pictured with his Denman poster.

Also winning were Annce Kadri who presented “The effects of ocean acidification and heterotrophic feeding on M. capitata and P. compressa biomass after a mass bleaching event,” mentored by Professor Andréa Grottoli and Scott Hull who presented “The petrologist’s guide to the galaxy: a method for modeling Earth-like exoplanets,” mentored by Associate Professor Wendy Panero.

At the Denman, Wendy Panero was announced as one of the five Distinguished Undergraduate Research Mentors (DURM) for 2016. To win these awards, mentors must be nominated by undergraduates participating in the Denman Undergraduate Research Forum and must demonstrate excellence in teaching and mentorship. Two undergraduates conducting research under her mentorship, Sam Perry and Scott Hull, presented at the Denman. A student committee reviews the nominations and selects the DURM winners each year. Wendy was the only research mentor from the College of Arts and Sciences so honored for 2016. Previous DURM winners from Earth Sciences are Berry Lyons and Yo Chin.

Congratulations to all the Earth Sciences students who presented and their faculty mentors!